Posted on November 3, 2018 by thewytchinghourblog

Well Halloween and Samhain are over again for another year. We had a small tea party for the children to celebrate and I completed my rituals earlier in the day. I gave myself my first tarot reading in a long time and it was spot on. There was only 4 extra children and 6 adults but it seemed too much for my youngest with autism and the next day he struggled, so we kept him off school. 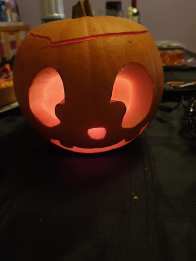 This week he’s been behaving much better and hasn’t hit anybody so I didn’t want to set him back. The oldest is suffering with anxiety so badly he’d couldn’t face school for the week, Monday morning he was shaking, his eyes were red and me and his dad have agreed his mental health comes become academics. I wish somebody had made that choice for me at his age. So we had a tea party, which was crazy and lovely. Next year though I think it’ll just be us.

Me and the boy watched the original Halloween after the party had finished. It not be the most popular view but I LOVE Rob Zombies Halloweens. I LOVE Rob Zombie full stop. However, I bow down to the John Carpenter greatness for the original Halloween. Except…this might make me unpopular but there are certain parts that I can see why Rob Zombie changed because watching the original for the first time in a long time they seemed faintly ridiculous. First point, Michael Myers driving. The idea that someone that had been in a mental institution since they’d been a child could drive is ridiculous. The sight of Michael Myers cruising down the road made me cry with laughter. Second point, the face when his mask came off…why? It looked wrong the way it was done. It’s something I don’t remember from watching it (multiple) times before. I haven’t seen the new Halloween yet but I know John Carpenter has erased any backstory that has built up over the versions. I liked the backstory Rob Zombie created. I think because I have sympathy for the villain. That makes it more interesting to me. Has anybody watched the new Halloween? Tell me what you think…I would have liked to have gone next week for my birthday but I have no babysitter (sad face).

We’ve been watching The Chilling Adventures of Sabrina. We haven’t binged watched it but watched a few. My husband and I enjoy it, the boy…I can’t tell. I felt quite smug that my husband didn’t know what long pig was and I did (because usually he knows everything!). It’s great to see some awesome British actors in it.

Last night we watched American Horror Story and it was liked meeting old friends, as it was the episode set in the murder house, back to series one. Jessica Lange was back….how I’ve missed her. I was intrigued by her fourth child, a little girl we haven’t seen before. I wonder how Anton LaVey from the Church of Satan feels (from his afterlife) about being referenced! Apparently not very amused from what I read on the Church of Satan’s website as he had turned down such parts before as he didn’t want to encourage people to associate Christianity with their churches beliefs. Aside from this, it was a good nostalgic episode, revealing more about Michael and what happened with the ghosts from the murder house while we’ve been absconding to Roanoke and staying at Hotel Cortez.

I decided this year to try National Novel Writing Month. It hasn’t been going too well so far. I’ve struggled to get past the first sentence, it’s been so long that I’ve written any fiction. I’ve had poems and short stories published before. I know it’s in me but at the minute it’s hiding and I’m already behind with my word count!!!

I’m currently reading, “Little Darlings” by Melanie Golding. I am so looking forward to this one. I adore dark fairy tales and folklore, so far I think this book is going tick my boxes.

So off I go, it’s my 41st birthday this week (eeek). I’ve booked for an autumn afternoon tea for the day. My sister is taking me for lunch the day after.

I'm a horror loving librarian with the need to share reviews of everything horror, gore and spooky related. I'm an avid reader of books, mainly horror, definitely supernatural. I'm a pagan and like to define myself as an eclectic witch. Halloween/Samhain is my favourite time of year from everything pumpkin spiced, the scent of decay and the veil between worlds thinning. So, here we are to share all things blood splattered, things that go bump in the night and crawl out of the darkness.
View all posts by thewytchinghourblog →
This entry was posted in General, Personal and tagged ahs, anton lavey, anxiety, Apocalypse, autism, birthday, books, church of satan, creative writing, Halloween, john carpenter, life, NaNoWriMo, Personal, reading, rob zombie, samhain, tea party, The chilling adventures of sabrina. Bookmark the permalink.